I’ve ridden the Whyte T-130 RS around the Downs but I’ve never ridden it the way it was intended to be so it really just seemed like another, albeit, slack suspension bike. To be fair, its been too wet and muddy.

I planned a trip to Bike Park Wales as it would be the perfect place to see just what all the fuss was about and whether I could step up to the mark set by Whyte. Every single magazine has put the T-130 way above any other bike in it class. They can’t all be wrong.

To get the most out of the ride I wanted to makes sure that nothing would hold me back and so for the second time in my life I donned body armour and to finish things off I dragged out my old Kona trousers. Back in the day when I was Mr Kona and Whyte was still the “enemy”, we used to push ourselves and our bikes limits and that is when thick baggies came in for protection, the Kona pants were the long version. You can fall of a motocross bike with these on and still get up unscathed.

The 130mm travel is close enough to my style that I can take advantage of it. I have tried DH bikes and can’t ride them as my flat out is so much slower than the designer intended for their DH design to work. I would have thought that of the G-160 but after two days in Wales I think that I’ll try 160mm travel for my next visit. I want more!

It is a beauty with massive standover clearance. The top tube is longish at 611mm for the medium (longer than my Scott Scale but shorter than Whytes 29 XC bikes) and according the Whyte’s recommendation I am on the limit for the medium. The other Whytes hitting even more headlines are the 901/905/909 trail hardtails and these have a massive 26mm longer top tube. Whyte don’t seem to be able to put a foot wrong with their designs but I’m still struggling to get to grips with their sizing. I could be a large T-130 but I am a small Saxon??? The T-130’s low front end is actually great for climbing and is perfect when the seat is lowered and gravity takes over.

See the Whyte T-130 in my short video review.

The shock absorption comes with a Rock Shox Pike 130mm travel and Boost 150mm axle (always best in its class since it appeared) and the rear a Rock Shox Debonair which has gone from being 2nd to Fox to now being rated alongside if not even better. Always run both with at least 30% sag (easy to set up with the sag marked on the shock’s shafts)

The transmission is Shimano 1 x 11 XT which now has the nice positive click that Sram has. I’d probably choose Sram myself so the lower priced standard T-130 would not be much of a down grade. The crank is a Race Face Turbine Clinch which is a nice touch as we know the RF narrow-wide chain ring is super reliable. And the big bonus is that all BB’s in the Whyte line up used standard, cheap and reliable external bearings. Well done boys! Brakes are the new Shimano M8000 XT.

Wheels are Sram Roam which are light, stiff, have great pick up and have stood up to some

really hard impacts but who at Sram thought that straight pull and, can you believe it, bladed!!! spokes were a good idea on an enduro rig? Tyres I never noticed and set with 30 psi they were perfect. Mind you, I’d love to try the Maxxis set up of the T-130 Carbon.

Bars are a massive 760mm and help open up the cockpit. With a 50mm stem the combination that and a 67⁰ head angle make the steering super sure and confidence inspiring. The Whyte saddles are always neutral and will suit most as it’s from the same place as the Charge Spoon and Fabrics. Of course the bike would not be complete without a Rock Shox Reverb, largely redundant in the Welsh gravity Park but handy on the up and downs of the Surrey Hills.

So how does it ride? I don’t know. I don’t feel qualified to judge a bike like this. I am not good enough. All I know is that from the first set of jumps to the first switch back berms of Sixtapod I was at full speed and feeling safe. That can only be down to the superb balance of the Whyte design. I felt that I could get away with anything that the trails threw at me. I did 8 runs at BPW and couldn’t have done another even if they offered me a free uplift for trying so hard. I, the XC hard man, was exhausted. I had ridden every run as if in a sprint competition. I was at my very limit and still around to write this up so I can only say that the bike worked, it didn’t throw me off despite me tempting it. It is inspiring which is exactly what I needed it to be. I wanted to jump and rail some berms and I did so. I also got away with a lot more. At Bike Park Wales and on the Whyte T-130 RS I was able to ride at what I felt was my very limit. I could not believe that I could go so fast. Thanks Whyte, you have just given me a whole new sport. I’ll be back.

A note on Bike Park Wales.

I was lucky enough in the Kona days to go to Vancouver and ride the Northshore (on a bike) and Whistler (on a snowboard). Bike Park Wales is like a UK version of the two combined. I never waited or a lift, the chat with the rest of the riders was a laugh and all the staff made you feel welcome whether it was securing your bike on the trailer, telling you tales about the place or looking up the postcode for accommodation. Book your trip NOW! 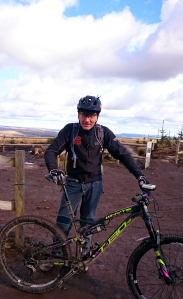