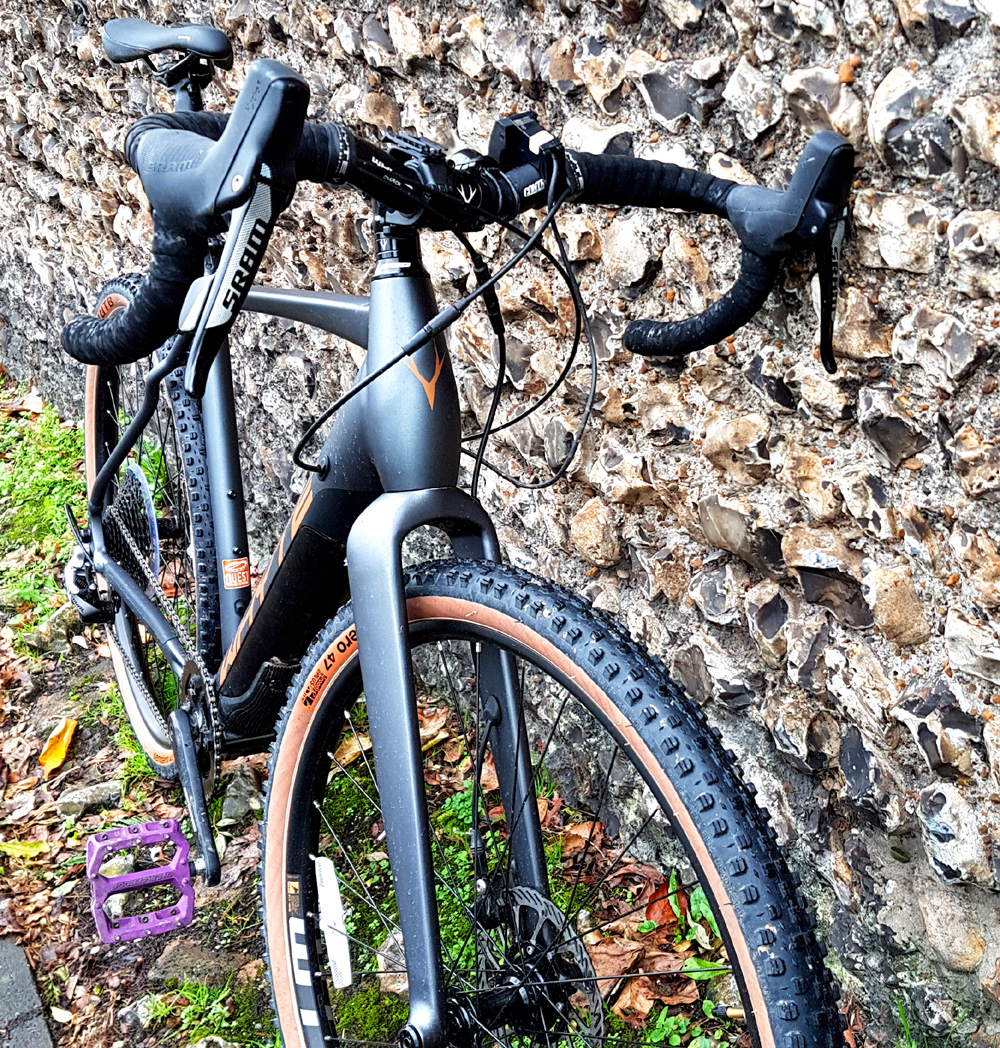 I had to ride the Whyte Gosford as the first person to try it came back disappointed. I wondered why? I decided to ride home with the dog in tow via Mount Carvey. This is a simple enough climb, not too steep, but requires effort to ride at speed.

I started by riding across the green in Breeze mode, eco to you and me. That was much easier than usual. I then hit the cycle path so cut the power. I felt as easy as the grassy section did with pedal assistance. In fact as I approached the climb I was spinning so freely that I couldn’t remember whether I was riding with or without power.

The climb started and I changed down a gear or two but seeing the lumpy entrance to the single track I clicked onto Breeze mode again. The first part of the climb was a dream. I wasn’t going any faster than XC racing pace but it was nice to be flying up there without the effort. The dog was still on the lead. Things were about to get interesting. As the track narrowed I realised that I was going too quick for my relaxed state. At this speed without power I’d be in full on race mindset alert to the potential pit falls caused by the heavy rain. After sliding through one corner, the dog had to go. I undid the lead and continued up this time enjoying the challenge and skill needed to handle the speed. As the track levelled I quickly reached down to cut the power. I was already going fast enough for the rutted and slippery track. It was pouring. I could have carried on without power but as the trail gradually rose I went into Breeze again. If you know the trail you’ll realise that it narrows and after the golf cart crossing. I tried River mode (medium). Whoa! This really needed skill and wearing work clothes and trying to carry a small bag I struggled – too quick! Breeze mode would have been more than enough. On the flat very narrow single track at my turn off I had to cut the power altogether in order to get through the bushes without coming a cropper.

The rest of the ride was down hill all the way. I was so glad that we had set the bike up tubeless just before leaving. I needed all the grip that the soft WTB Sendero 47mm tubeless tyres could give me.

The following morning I rode about 8km around town, the first half without switching on the battery and the last few km without power as the was none left. Whilst it is a lot heavier than my Whyte Friston on the ride around town it did not feel any different other than the extra volume of the tyres.

First, the power switch needs to be more accessible like all the other e-bikes that I have tried. In fact on an e-mountain bike I hardly, if ever, change the power setting. Not so the Gosford, I found cutting the power more important than adding it. I might even unravel some of Whyte’s extra long bar tape to bring it closer to my hand position. You must remember that unlike an e-mountain bike that you never ride without pedal assistance this is just a normal bike that can have power assist when required. In fact the first test that I did on the bike was without battery. It rides just like the Glencoe.

I need another go with my riding brain turned on and not the laid back dog walking mindset of last night.

I spoke to the guy that came back underwhelmed and his issue was that he wanted to ride the fire roads where he lives at way more than the 25km limit that comes on e-bikes in Europe. On the technical stuff, as I found, he was really impressed. He, like me, is fit and so can ride the fire roads over 25kph. However, there are a lot of riders that can’t. The Gosford is perfect for them or for the bike packer who is carrying 20 kilos of gear. Some riders may themselves be carrying 20 kilos of excess baggage too.

The bike is here for you to try. Give us a call. Quest Adventure